wavebalance® Therapy MED and Therapy SPA: the healing rhythm of the waves 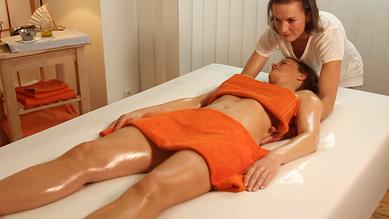 Intro
The flowing, rhythmic and wave-like 3D oscillation wavebalance® therapy programme on the BalanceFloater® is borne by water. A perfect interplay of therapist, guest and the healing powers of water begins – with the aim of ‘reorganising’ and ‘reenergising’ the body of the guest.

Copy
wavebalance® is a comprehensive therapy system, developed by physiotherapist Manuela Sonntag. People of all ages benefit from the healing rhythm of the waves. Its unique feature is the holistic combination of warmth, water, wave undulation and the manual skills of the therapist – as the basis for the full unfolding of the body’s self-healing forces. This results in a perfect interplay of therapist, guest and the healing powers of water with the aim of ‘reorganising’ and ‘reenergising’ the body of the patient.

3D oscillation technique and training programme
wavebalance® is a comprehensive therapy based on oscillation motion. It is conducted either passively as 3D mobilisation by the therapist or as active training by the guest. Manuela Sonntag has developed a training programme for the holistic 3D oscillation technique which is adapted to the individual requirements of the particular SPA and therapy establishments. Manuela Sonntag offers interested therapists workshops at her own wavebalance® Academy in Wuppertal, Germany.

Integration into everyday movement
The therapeutic success of the wavebalance® system lies in the playful and natural handling of the guest, combined with the long-term promotion of the guest´s movement and relaxation skills. People of all ages rediscover joy in movement, which they automatically incorporate into their everyday lives – simply by way of ordinary movement such as walking. “Becoming active is easier than we often think,” says wavebalance® developer and physiotherapist Manuela Sonntag. “When we discover the natural mobility within us, it happens all by itself.”

BalanceFloater® as co-therapist
The optimum foundation for the undulating, rhythmically flowing movement and treatment technique is the BalanceFloater®. In cooperation with Akva Waterbeds A/S, wavebalance® has developed a treatment bed filled with approx. 500 litres of warm water – for massages, therapies and movement. The therapy, aided by the waves and undulating water, can be done with or without oil, the body being massaged from above and below at the same time. The resonating water acts as a ’co-therapist’, reducing the therapist’s own energy expenditure at every treatment.

New: BalanceFloater® now available in new size: 1.10 m x 2.20 m x 0.85 m.
A wavebalance® innovation this year is the further development oft he successful BalanceFloater®. At 1.10 m x 2.20 m x 0.85 m, the new therapeutic waterbed fits into practically all massage facilities. This opens up new opportunitites for even more therapists and facilitites to offer their clients a wider treatment range with wavebalance®. The new BalanceFloater® waterbed is optimal for wavebalance® massages, with and without oil. The height is ideal for smaller therapists, and patients can climb on and off the waterbed without stressing their backs. Simultaneous anterior and posterior massage strokes are possible with the patient lying in a supine position. Together with the movement of the waves, deep strokes are possible, leading to a sustained mobilisation. Balance is regained in only a few minutes.

BalanceFloater® Aura with sound system
The BalanceFloater® Aura extends the wavebalance® programme to include the component of music via a high-end sound system for water beds. The structure of water reacts to every kind of oscillation – natural sounds, language or soothing music. The core of the waterbed transmits the oscillation to the whole body as palpable vibration. Feeling and hearing blend into one deep-reaching experience.

wavebalance® at the Allgäuer five-star resort Sonnenalp.
The Sonnenalp is one example of a hotel that has successfully implemented wavebalance®.. The SPA experts there use their BalanceFloater® for massages, movement therapy and for warm water therapy.
„The price-performance ratio convinced me. We were able to amortise the prime cost with-in a few weeks.“ – so Jörg Müller-Loennies, Spa Manager of the Sonnenalp. The five star resort hotel offers its guests 3 wavebalance®-Signature-Treatment couches. „The Sonnenalp-Spa has been using the energy of water for a long time now but with the wavebalance® treatment they have in fact attained totally new effects. wavebalance®- founder Manuela Sonntag added, „Bedded on our water couch the body is light and can let go completely to the rhythem of the water. Blockades disappear, joints are unburdened, and muscles relax. The same goes for the psyche – the inner stress just pours out.“

With this sustained and holistic effect on body, mind and soul, wavebalance® will once again impress visitors of the „Beauty 2016“ trade show. Manuela Sonntag and her team look forward to a face-to-face dialogue with interested therapists, hoteliers and spa operators – in hall 9 / C 51.

For further information and queries: